Key Use Cases For Magma

As discussed in a previous post, Magma differs from other implementations of a mobile packet core (both proprietary and open source) in some significant aspects. Notably, Magma adopts the SDN approach of centralized control with a distributed data plane, adapting this to the requirements of a packet core. Fundamental to this approach is the early termination of 3GPP protocols close to the radio access network (RAN). As a result, Magma has some limitations as outlined previously, but also is particularly suited to some specific use cases, which we describe below.

Magma performs more reliably than traditional implementations when backhaul is unreliable, e.g., when the backhaul link has relatively high loss or latency. The reason for this is that Magma changes where the protocols that operated between UEs and the mobile core are terminated. In traditional 3GPP implementations of a mobile core, backhaul is used to connect eNodeB/gNBs back to the mobile core, and thus the UE signaling to the core has to traverse the backhaul links. In Magma, the Access Gateway locally terminates 3GPP protocols next to the base stations, and hence the signaling does not traverse the backhaul.

A concrete example of how unreliable backhaul impacts mobile core performance is as follows: lost or delayed messages between the core and a UE can cause the session to the UE to be torn down. This alone is disruptive, but some low-end UEs then fail to re-establish the session automatically, leading to a poor user experience. By terminating the 3GPP protocols next to the RAN, UE sessions are not exposed to the backhaul links, thus circumventing this issue.

High latency links such as those provided by geostationary satellites are another case where local termination of 3GPP protocols provides a benefit. Optimization of TCP performance over satellite links has been extensively studied and techniques to improve performance range from standard TCP capabilities to “connection splitting” and other optimization techniques offered by commercial appliances (e.g. here and here). Local termination of 3GPP protocols in the access gateway ensures that all signalling over the backhaul in Magma uses TCP. User TCP traffic also traverses the backhaul without further encapsulation (rather than as GTP-U). This, in turn, makes it possible to apply TCP optimizations to this traffic as it traverses the satellite links.

In some (non-Magma) remote deployment scenarios, the solution to unreliable backhaul is to deploy the entire EPC next to the RAN. This solves the problem of running signaling protocols over the backhaul, but now creates the problem of remote EPC management. Furthermore, the number of EPC systems to be managed is now increased, and the footprint at each remote site is increased.

The Magma approach of centrally managing Access Gateways, each of which terminate 3GPP protocols local to the radio access network, addresses the backhaul issues while maintaining a small footprint at each remote site and allowing centralized, network-wide management of the wireless service.

Private LTE–that is, LTE networks operated for a single organization–has emerged as a key use case for Magma, particularly in industrial IoT environments such as mines and farming. The properties that make Magma attractive here are:

As we detailed in an earlier blog, Magma has been adopted by the Helium and Pollen Mobile networks as a mobile core implementation for a fully distributed wireless network. While it is conceivable that a different choice might have been made (or could be made in the future), the rationale for choosing Magma is that its highly distributed architecture aligns with the goal of these Decentralized Wireless networks to be fully distributed. The main property of Magma that makes it a good choice for Decentralized Wireless is the distributed, scale-out nature of the access gateways. Consider the addition of a single independent node to the network: the node provides radio coverage in its local area and enough additional capacity to handle traffic commensurate with that coverage via the addition of a Magma access gateway. It is difficult to imagine how a comparable scale-out approach could be achieved with traditional centralized EPC implementations.

It remains to be seen whether the current Decentralized Wireless efforts will take off, but we believe that there is a case for distributed approaches like Helium and Pollen Mobile even if this precise approach does not pan out. As we noted in the prior blog, the importance of small cells in 5G is one factor that creates incentives for networks to be more distributed compared to the large cell networks of prior generations. The distributed approach to cellular spectrum allocation that CBRS enables is another factor supporting the rise of decentralized networks.

We observe that deployments of Magma for fixed wireless networks constitute the most common use case (see, for example, MuralNet and Access Parks). Whereas for the preceding use cases we argue that Magma’s architecture is particularly well suited for the use case, in the case of fixed wireless it is more a matter of being a good match to the feature set. Having been deployed into fixed wireless settings for several years, it follows that feature development for Magma has continued to track this use case.

For example, remote management of radio equipment is a feature that assists in fixed wireless.

Centralized management of the access gateway is also beneficial for fixed wireless settings, given that there is often little local IT support for management. (Note, however, that more traditional EPC implementations, given good quality backhaul, could also offer remote management by locating the EPC equipment at the remote end of the backhaul link.) Conversely, the lack of rich mobility support in Magma (due to be addressed in the future) does not impede its use in the fixed wireless use case. A complete set of features for Fixed Wireless Access is documented here. 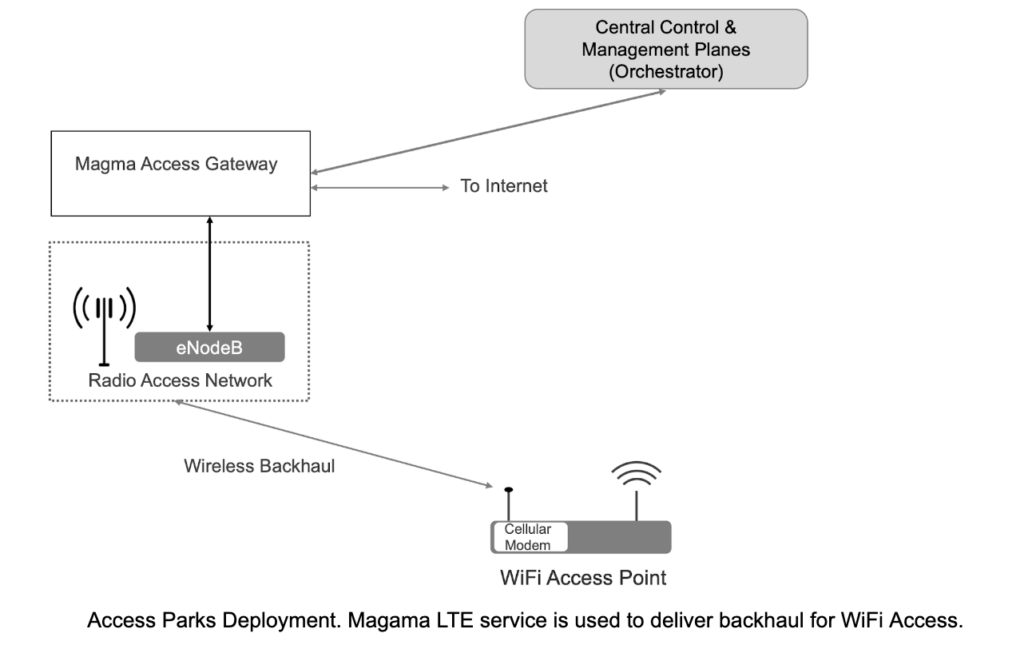 One example of a successful Magma deployment for fixed wireless is the Access Parks use case, which is described in our forthcoming NSDI paper and depicted above. The operational cost reported for this deployment was 43% lower using Magma than the initial deployment. This is largely attributed to the lower complexity of managing the LTE network with Magma relative to the traditional, centralized EPC implementation previously trialed. This analysis is discussed further in our forthcoming NSDI paper.

Magma provides advantages in performance, reliability, and operational complexity for particular use cases as outlined above. In particular, the decision to distribute much of the 3GPP protocol processing out to the Access Gateway delivers advantages when the backhaul link from RAN to central sites is unreliable. The distributed, scale-out approach with local breakout is a natural fit for private LTE or 5G, as well as for decentralized networks such as the Helium Network. And the relatively large number of fixed wireless deployments over several years has resulted in a good fit between Magma features and the fixed wireless use case.